An important part of flow is the cycle time for design-build-test. To become more rapid and responsive, we can improve physically (e.g. design for agility, rapid prototyping, agile manufacturing, robot testing, etc.) and virtually (e.g. model based, digital twin) or a combination of both (e.g. augmented). Virtual building, integration and testing basically turns hardware into software enabling us to use many of the practices and tools from the software world like automated testing, BDD/TDD, etc. Both physical and virtual testing have their limitations. In the physical world it is impossible or economically unsound to build and test every configuration for any imaginable circumstance and scenario. At the same time do virtual models have their limitations of mimicking the real world and one need to invest to be build and validated them first. However fast and cost effective we become at physical building and testing, in many cases virtual testing will be faster and more cost effective. Recent developments like cloud based computing and out-of-the-box modelling tools, make virtual testing rapidly replace or enhance much of the physical testing. Virtual testing also opens up many new opportunities like: detailed time-lapsed analysis of virtual car crash test results; enabling stakeholder review or collaboration even when physically not at the same location or even time (e.g. send a augmented review file with change notes); quick A/B tests for marketing purposes, manufacturability or serviceability or durability testing via digital Twins; etc.

The decision to go for physical or virtual (model based) is based on different aspects:

The overall product flow strategy is the main determining factor for testing what and when. This is mainly based on value / effort, or better, cost of delay / duration. Many times however, strategy is also influenced by contract obligations, internal politics, budget, etc. Splitting into objectives, goals (and features/stories) then determines the product flow and with that testing flow. For instance, we can first build a basic version with ‘happy flow’, later we can extend to more complex handling and finally do some exception handling like machine failures. More on this you can find in Guide Flow and Manage Flow.

A second influencing factor is the local economics of testing (including any building and integration). Ultimately, we would like to test each increment / iteration completely end-to-end with maximum reliability. But, for given circumstances, this might not be the economically sensible thing to do. There should be a balance between holding cost (risk, learning, revenue, etc.) and transaction cost (materials, hours, etc.). 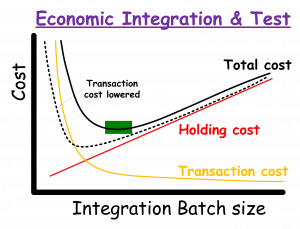 The image, based on the works of Don Reinertsen, shows a U-curve with an optimum (green) area. For the given circumstances this would be the economical sensible batch size for integration and testing. To be able to become more rapid and responsive, we need to reduce the batch size by reducing the transaction costs. This can be done by for example: virtual testing (model based), test automation (virtual or physical), using proxies like stubs, mock-ups and scaled models, integrate and test risk-based (only the affected part, only to the level of detail needed), produce via in-house workshop or rapid proto suppliers or fast-lane in factory, etc.

For testing the modules that are being formed by the increments delivered during development, we can distinguish three strategies: 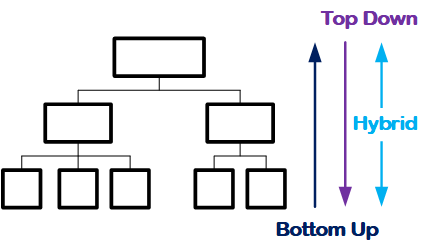 To respond and deliver value to our customers fast, we would like to push through each small increment into production. For example, when we find a small flaw in our car design, we would like to fix it fast and make sure the next car that runs of the production line has the improvement. However, since any change imposes risk, we need some mechanism to decide whether to release something yes or no. This is also known as release on demand. It simply means that you may develop continuously, release is only done after approving. When quality is build in and at a high level including a fast recovery process, the act of releasing can be very fast and decentralized. Besides risks there may be other reasons to defer release. For example, you want to release at the start of a new season, or make a market impact by releasing a combination of functions, or wait for a higher level of performance, or respond to a competitor move, etc. For more on this, see Goal – Trade-offs an keeping the balance) and there have to be some decision points  and for marketing purposes it might not be.

To be able to control what is or isn’t released and for what/who, you can use a combination of configuration files and feature toggles. Feature toggles are commonly used in software releasing. They are conditional statements in the software where configuration settings determine who may get/see/use it. In other words, a section of software code is only activated if the conditions are met. For hardware these feature toggles are also very valuable. In case we use model based engineering or have a digital twin proto, we can of course build our feature toggles in there and run automated test cases that make use of the toggles. In case it becomes physical, we need some rethinking for it to be applicable.